After a win against Latvia, Poland only need a victory over Macedonia to clinch UEFA EURO qualification / PZPN
Lewandowski’s Hat trick Stomps Latvia

The bialo-czerwoni came into the encounter as the clear favourites and that showed in their game.

While Jerzy Brzeczek’s side did start things rather sluggishly, by their first complete play they had already the lead. Robert Lewandowski opened up the scoring in the 9th minute, where he found himself in a one-on-one situation with the goalkeeper after an assist by Sebastian Szymanski.

Four minutes later it was already 2:0. Lewandowski was again the player to put the ball in the Latvian net, which this time saw him pounce on goal unmarked in the penalty box after a very good play from Kamil Grosicki on the right wing.

The 27th minute saw Grzegorz Krychowiak take an attempt on goal from long range, but Andris Vanins for Latvia managed to parry off the shot and avoid seeing the hosts be downed by three so early on.

In the second half, Poland continued to play their game without needing to up the tempo. Lewandowski this time completed his hat trick in the 76th minute, where he calmly fired on goal from six meters away after another pass from Grosicki.

Historic Win for Poland in Zenica Over Bosnia

Poles Wrap Up EURO 2020 Qualifiers With Victory Over Slovenia 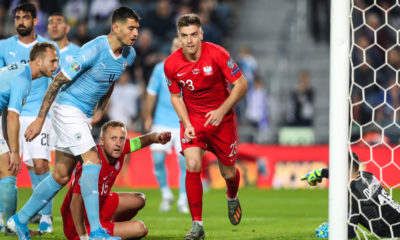 The very latest football data here. Just loading statistics from information source.
EURO 2020 Qualifiers: Poland Roster for Latvia and North Macedonia
Macedonia Fall as Poland Clinch EURO 2020 Qualification
Do NOT follow this link or you will be banned from the site!